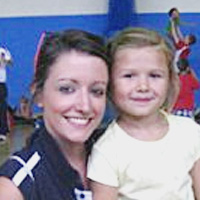 I’m from Northallerton and currently I’m a Cover Supervisor in a school in Oxfordshire. I studied for a sports degree at Sheffield Hallam University because I’ve always had a passion for working with young people in sport.

King’s Recruit have helped me so much over the past few years. I started working for King’s Recruit clients in 2008 as a multi-activity coach in the UK and Europe. I’ve had some fantastic times running camps for the children of British Armed Forces personnel on military bases in the UK, Germany and Italy.

As I developed my skills I was offered more senior positions with King’s Recruit clients and have even worked in the King’s Recruit office as a recruiter myself. I’ve just been in South Africa working as an Activity Camp Manager. The experience of helping to build the confidence of disadvantaged children was life-changing. Via King’s Recruit I’m hoping to return to South Africa again soon as a volunteer.